The Linguistic Bibliography is made possible by the valuable work of our contributing linguists around the world, who gather, compile and annotate bibliographical references within their field of expertise. Click here to learn more about becoming a contributor.

Editors
The Linguistic Bibliography is currently edited by three in-house editors who are located at the Brill office in Leiden. To contact the editors, you may send an email to [email protected] or view the List of editors.

Brill
The Linguistic Bibliography is published in print and online by academic publisher Brill. Founded in 1683, Brill is a publishing house with a rich history and a strong international focus. The company’s head office is in Leiden, (The Netherlands) with a branch office in Boston, Massachusetts (USA). Brill was listed at the Amsterdam Stock exchange in 1896. Brill shares have been publicly traded since 1997.

Abstracting policy
As of 2012, the Linguistic Bibliography Online includes abstracts and summaries in bibliographical descriptions of books and articles. This service to our users is exclusively available in the online version of the Linguistic Bibliography, i.e. abstracts do not appear in the annual print volumes. Abstracts are displayed as they appear in the original publication, although formats may be edited for technical reasons, and copyright remains with the author and/or publisher.

We are much obliged to the publishers, organizations and journal editors providing abstracts free-of-charge and granting us permission to display them in our online database. Click here to view the full list of cooperating institutions.

Request for inclusion
To request the inclusion/indexation of a journal or other type of publication in the Linguistic Bibliography, please send an email with details of the publication (URL if possible) to [email protected]. All suggestions will be processed very carefully by the editorial staff. Click here for more information about the criteria for inclusion.

History of the Linguistic Bibliography/Bibliographie Linguistique
The idea of compiling a linguistic bibliography was conceived in 1946, at the sixth meeting of the CIPL (Comité International Permanent des Linguistes/Permament International Committee of Linguists) in Paris. The bibliography would cover linguistic publications of the previous years in order to re-establish international contacts between linguists which had been interrupted by World War II. Linguists from ten different countries contributed to the first volume, which was was the responsibility of Prof. Christine Mohrmann, who soon entrusted the work to Jan Beylsmit. In 1948, the newly founded UNESCO agreed to make a financial contribution to each volume, which would cover the printing costs. In 1949, the first volume of the Linguistic Bibliography/Bibliographie Linguistique (LB) was published by publishing house Spectrum (Utrecht, The Netherlands).

From then on, new volumes of the LB yearbook were published, first with Spectrum, then with Martinus Nijhoff (1980-), Kluwer (1988-), Springer (2005-), and finally Brill (2008-). From 1983, the LB staff were housed in the Koninklijke Bibliotheek (National Library of the Netherlands), where an online bibliographical database was developed. The Linguistic Bibliography Online (LBO) was launched in 2002 and contains all bibliographical references from 1993 onwards. 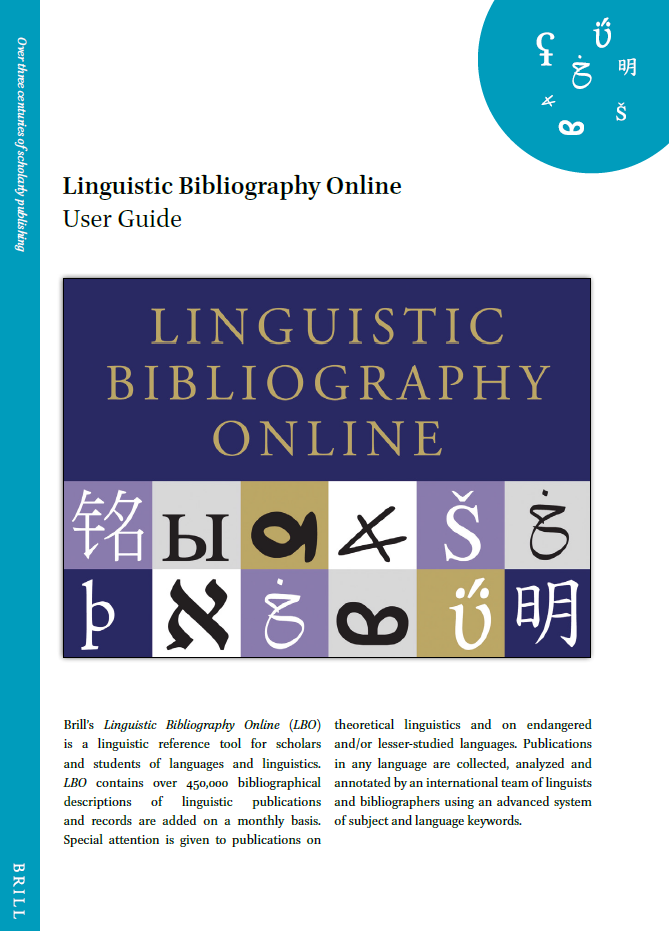 Clear history
Give us your feedback